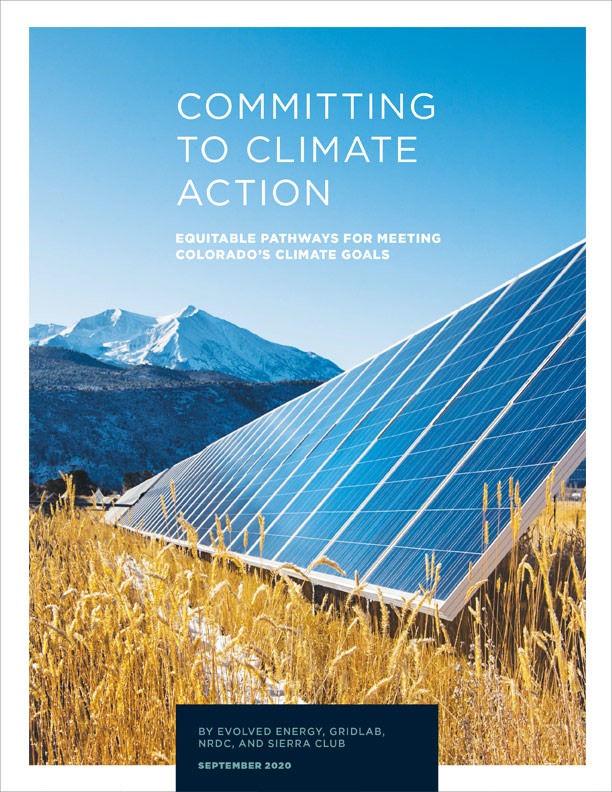 Physicians, Scientists, and Engineers for Healthy Energy assessed opportunities to integrate pollution reduction, climate resilience, and energy and environmental equity in to the state’s economy-wide decarbonization plans. Those equity focused climate strategies for each state can be found at:

The following state reports detail the modeling outcomes of our analysis, as well as a series of policy recommendations for each state to equitably achieve its economy-wide climate goals.

COLORADO: This report offers a pathway for the state to meet the requirements of House Bill 19-1261, which tasks the Air Quality Control Commission with crafting and implementing a plan to reduce greenhouse gas (GHG) emissions 26 percent by 2025 and 50 percent by 2030, based on 2005 levels of emissions, with a goal of reaching 90 percent reductions by 2050.

The topline report finding is that the most cost-effective scenario to meet Colorado’s emissions reduction goals relies on generating 98 to 99 percent of electricity with renewable resources by 2030. Colorado is not on track to meet this emissions reductions target, having set a previous goal of reducing emissions from electric utilities by 80 percent by 2030. Powering the electric sector with renewable resources will make it easier to reduce emissions in other sectors such as transportation, buildings, and oil and gas production.

NEVADA: Nevada’s leaders have recognized the urgency of the climate crisis, passing a 50 percent renewable portfolio standard in 2019 and setting statewide greenhouse gas (GHG) emissions reduction goals of 28 percent below 2005 levels by 2025, 45 percent by 2030, and zero or near-zero emissions by 2050. This report describes pathways and policies to meet these goals, the equity, air pollution, and cost implications of doing so, and associated policy recommendations. Our modeling shows Nevada can meet GHG goals with energy costs similar to or even lower than today’s. Our analysis also shows that additional energy efficiency and demand flexibility can reduce the cost of the transition.

New Mexico: New Mexico is already experiencing the impacts of climate change. State policymakers have signaled their commitment to climate action through the clean electricity targets in the Energy Transition Act and Governor Grisham’s Executive Order 2019-003 establishing a state-wide greenhouse gas emissions reduction target. Now is the time to take the next steps to build out clean energy resources and infrastructure, diversify the economy, create family-supporting jobs, and ensure near-term emissions and pollution reductions to achieve the state’s goals. Our analysis shows that New Mexico can meet science-based climate pollution limits with significant growth in job-creating clean energy and energy efficiency industries, while reducing harmful air pollutant emissions and with little to no change in household energy costs from business as usual. Doing so requires a steep reduction in emissions over the next decade driven by three core strategies: cleaning up and setting strict pollution limits on oil & gas, deploying renewable energy and energy efficiency, and electrifying buildings and transportation.

Begin typing your search above and press return to search.